It was the devil who envied God’s gifts to humanity before the temptation of Adam, who was now unable to understand God’s 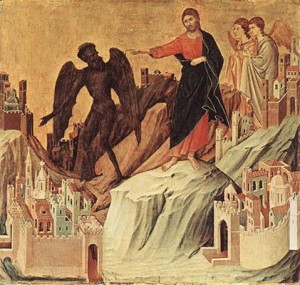 being present in a human being. The Lord was therefore tempted immediately after being baptized. His temptation indicates how sinister are the devil’s attempts especially against those who have been sanctified, for he eagerly desires victory over the saints.Jesus did not hunger for human food but for human salvation. It was after forty days and not during forty days that he hungered. Moses and Elijah were not hungry during the same period of fasting. Therefore, when the Lord hungered, the work of abstinence did not creep up on him. His strength was not depleted by his forty days of fasting. He did not abandon his nature as a man. The devil was not to be defeated by God but by the flesh, which he surely would not have dared to tempt, except in those things which he recognized were proper human needs because of the pangs of hunger.